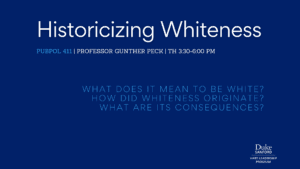 Examines origins, historical development, and consequences of white racial identity, from the 17th century to the present, beginning with the emergence of white racial grammar among trafficked white servants and so-called “white slaves” to the creation of racialized rights and privileges for white people in Great Britain and the United States in the 19th, 20th, and 21st centuries.