“So many of us resign ourselves to what is; we begin to have a lack of moral imagination,” Booker told a crowded audience in the Sanford Institute’s Fleishman Commons. His talk on “The Next Generation of Political Leadership” was part of the Connect2Politics initiative of the Institute’s Hart Leadership Program, which was among several campus groups sponsoring his visit.

“We are so much more capable of becoming the society we want to achieve,” Booker said in a talk that ranged from Biblical references to tales of his improbable journey from being a Rhodes Scholar and Yale-educated lawyer to becoming a community organizer in one of Newark’s toughest housing projects. He later served on the city council and, since 2006, as mayor. “Street Fight,” a documentary film about his unsuccessful 2002 mayoral campaign against an incumbent later convicted of corruption, was nominated for an Academy Award. 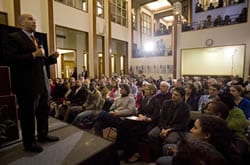 During his visit to Duke, Booker also met with students and was interviewed for the Living History Program, an initiative that documents conversations with American and world leaders who have been part of historic events.