When Michaela Stith (Trinity ’18, SOL ’15, Hart Fellow ’18-’19) first went to Tromsø, Norway for her Hart Fellowship experience, she wasn’t anticipating writing a book. However, she collected a body of writing from her Hart Fellowship’s “Letters Home” which later became the basis of her debut book, Welp: Climate Change and Arctic Identities 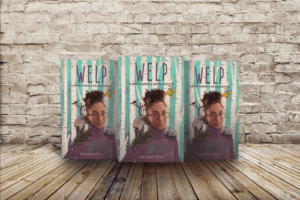 . Her travel memoir seamlessly weaves together the intersections of race and racism, climate change, and the many misconceptions which southerners hold about the Arctic through anecdotes, interviews, and memories, with Stith’s strong narrative voice at the center. As Stith explores her Alaskan upbringing, her first experiences down south at Duke, her time working with the Indigenous Peoples’ Secretariat of the Arctic Council, and her travels to Norway and other Arctic countries, she constructs a compelling story about what it means to be a citizen of the Arctic.

The only member of her entire Duke class from Alaska, Stith was sometimes called “Alaska” by her peers. Her northern identity is an integral part of who she is, and guided her studies throughout her time at Duke, where she graduated with distinction in Environmental Sciences and Policy with a concentration in Marine Science and Conservation.  She studied abroad in Iceland and Greenland, and wrote an honors thesis with research about the Alaskan Cruise Tax Initiative. Welp beautifully encapsulates the idea of a transnational, Arctic identity and examines the nuances and intersections of this identity among Black and Indigenous peoples and people of color.

Stith found her voice as part of Duke’s Black community, joining student groups, engaging in several protests, and even writing a letter to the editor in the Wall Street Journal which garnered hate mail and threats from all corners of the internet and from her fellow students. Despite this final experience, Stith is unafraid now that Welp has been published, saying that she refuses to be “shamed into not talking about what matters” to her. She hopes that her book will reach young people of color in the Arctic like her and will help them to realize that there are communities and spaces where they can belong. She also believes that Welp will challenge the homogeneous outside narrative of the Arctic as a barren, desolate place with few occupants and no diversity, instead showcasing her experience in a multicultural Arctic encountering many of the same challenges faced by other global regions.

A lifelong Alaskan, Stith was surprised to discover just how similar and how different life in Norway was compared to life in Alaska. There were the same moose and fireweed she was used to, but as she got to know people, she encountered numerous cultural differences. She quickly learned that her bubbly, outgoing personality was appreciated, but uncommon, and had to adjust to new social norms like not greeting strangers on the street. One of her more surprising discoveries was that she shouldn’t ask a new person to get coffee or a meal with her until they had first completed a less intimate, more structured activity like blueberry picking. Luckily, she lived with a group of Norwegians who helped her to acclimate to her culture shock and who explained these unwritten rules.

The Hart Fellowship, a ten-month fellowship that offers recent Duke graduates the opportunity to conduct intensive research in collaboration with global and domestic organizations facing complex social, political, and humanitarian problems, enabled Stith to travel to Tromsø in partnership with the Indigenous Peoples’ Secretariat. In Tromsø, she conducted research and secretarial assistance in support of Indigenous peoples’ organizations with Permanent Participant status in the Arctic Council. Having grown up in Dena’ina traditional homelands, she particularly worked with Arctic Athabaskan Council.

Stith is currently employed at the Polar Institute, where she continues to work on matters related to Arctic governance, climate change, and the rights of Indigenous peoples. You can read more about her work and experiences in Welp: Climate Change and Arctic Identities, which is available for purchase now.