Austin Ruiz (LAPI ’16) on the value of diversity in theater

When doing press for his juggernaut musical Hamilton, writer and creator Lin-Manuel Miranda is often asked why he chose to use a racially diverse cast and innovative hip hop and rap music to tell the story of America’s Founding Fathers. In response, he says simply: “This is a story about America then, told by America now and we want to eliminate any distance between a contemporary audience and this story.”

According to Austin Ruiz, a rising senior (’17) double majoring in Public Policy and Theater Studies, this could just as easily be the slogan for Arena Stage, the theater where he worked for his LAPI summer.

Arena Stage, located in Washington DC, is a “national center dedicated to American voices and artists”, truly committed to producing American work in all its different presentations. Austin writes:

Arena’s main focus is American work so they produce plays accordingly. However, what’s unique about that is that since America is so diverse itself and given we’re known as the great melting pot, the seasons Arena put together are incredibly varied as well. They produce diverse and ground-breaking work—often world-premieres—and Arena is committed to commissioning and developing new plays through their American Voices New Play Institute…Works that are racially diverse and that put #OscarsSoWhite to shame.

I mean just in their last season, Arena produced shows about former President LBJ, a Muslim-American man struggling with identity in America, and even put up a telenovela inspired musical comedy. Where else in the world do you know of a theater company with a season like that? I certainly can’t think of one that even comes close.

One of the most recent examples of this was Arena’s summer musical production of Born for This: The Bebe Winans Story, for which Austin worked behind the scenes to help develop and fundraise. Telling the story of famous gospel singer Bebe Winans, the show was not only born out of a diverse creative team, but also featured an incredibly diverse cast. It was attended by Arena donors, prospective donors, board members, and staff, as well as many Washington area residents, and ended up being an enormous success. 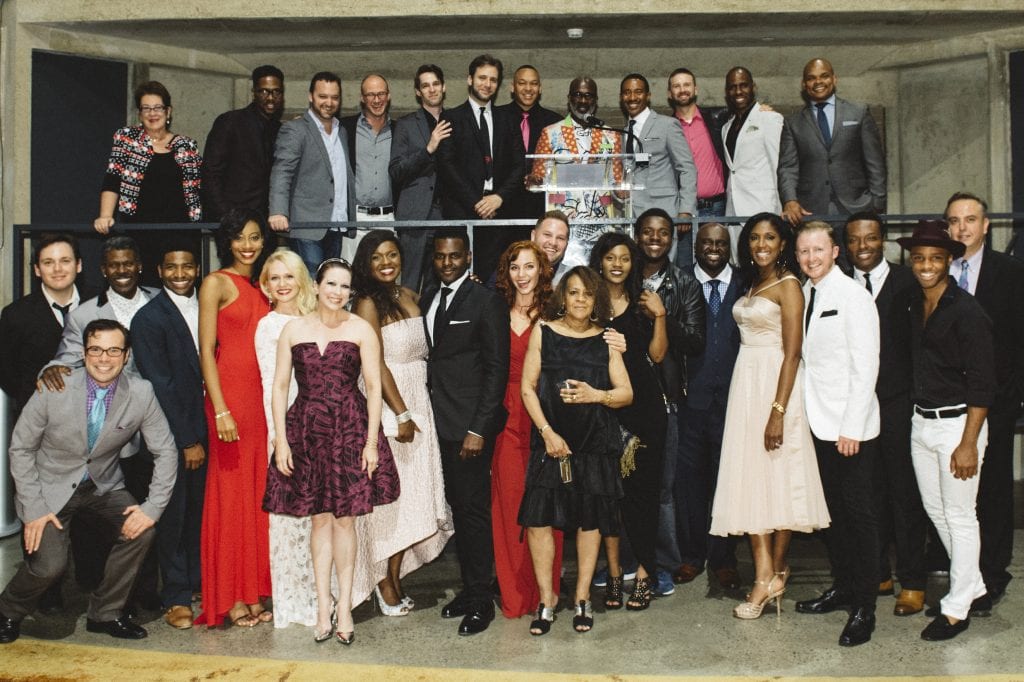 The company of Born for This: The BeBe Winans Story on opening night at Arena Stage at the Mead Center for American Theater, July 7, 2016. Photo by Cameron Whitman. 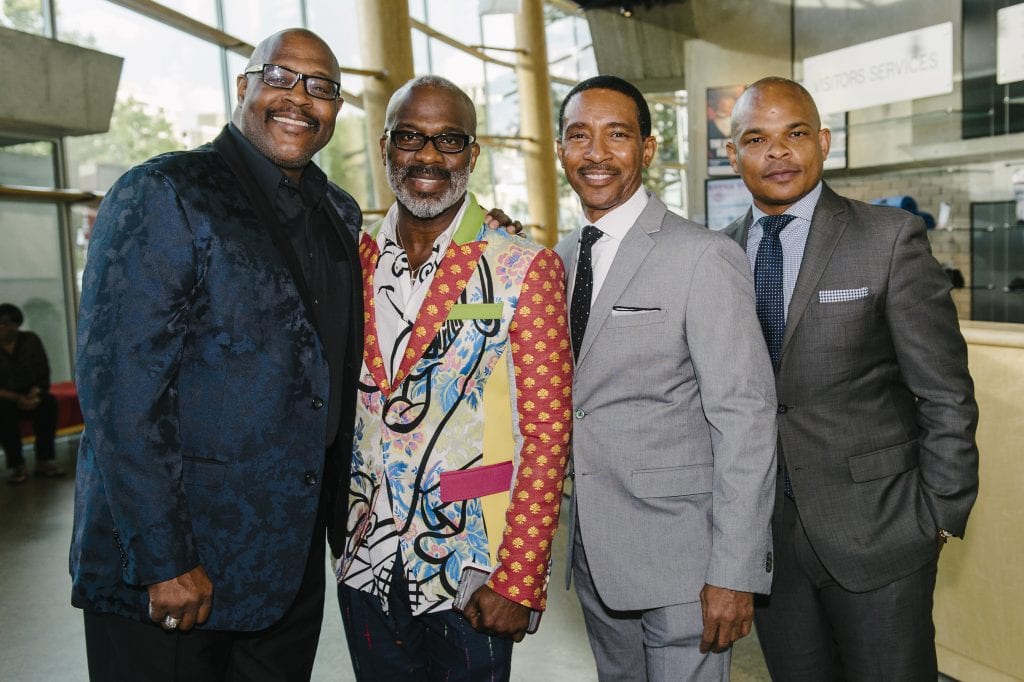 However, through his internship experience, Austin came to see firsthand that diversity is not just an ideal that Arena strives for in its performances. It’s also something that they cultivate in their staff:

Arena is a theater company that was founded upon ideals of diversity and inclusion. It was one of the first theater companies to hire African-Americans in any capacity and its intern and fellows program originally was established for that purpose. I’m not sure if the program still strives for that goal and gives preference to P.O.C. [people of color] over other candidates, but I will say that of the five interns this summer two are Latino, one is black, and four are women.

Even outside of the intern/fellows program, there’s a decent amount of diversity at Arena in other departments. Despite both our Artistic and Executive Directors being white and what seems like a white majority amongst staff, there are many people of color in all departments and the majority of staff is women. 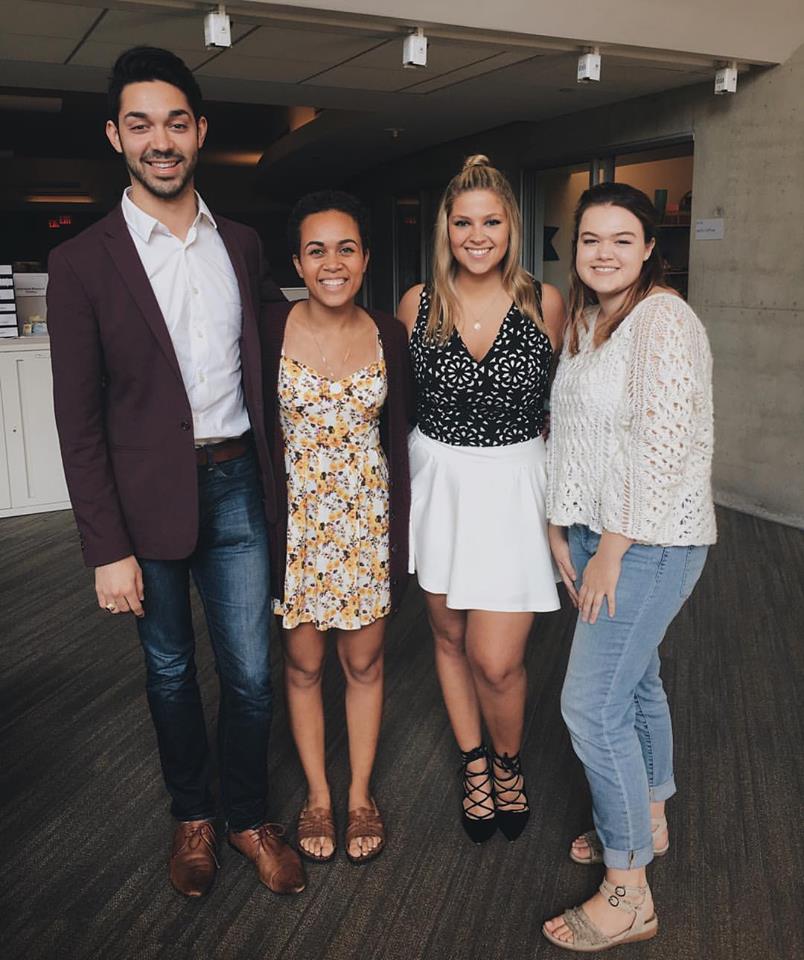 Austin Ruiz and three of the other interns at Arena Stage

Austin’s experiences at Arena truly allowed him to appreciate the power and the groundbreaking nature of Arena’s work. Especially in our current political climate, the question of who is “American” and who gets to claim ownership over American narratives has become more critical than ever. Austin writes:

I say all this merely to express how in awe I am of Arena at this point in my internship. I finally have grasped the impact of the work being done here and I think it’s absolutely incredible. Even more so, audiences in D.C. and patrons of Arena love it. They come back year [after] year and [they] allow Arena to continue to commission new plays and put on work that really does reflect the American spirit and that is really amazing. Arena has established itself as this hub for actors of all races and creeds in every facet of the theater and has truly embraced the belief that art is not for the privileged few, but for the many. 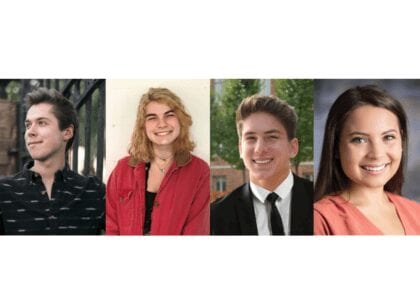 The Leadership and Arts Policy Internship (LAPI) grant is an award up to $4,000 that is sponsored by the Hart Leadership Program to support innovative internships for public policy students exploring leadership and arts policy. 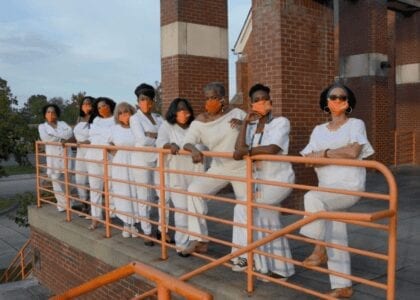 Former LAPI Fellow Multy Oliver (T‘21) began interning with the Hayti Heritage Center last summer as part of her LAPI summer. She enjoyed her experience so much, she continued to support the organization throughout the academic year. “I’m surrounded by individuals who look like me and share my values for uplifting minority communities through arts… 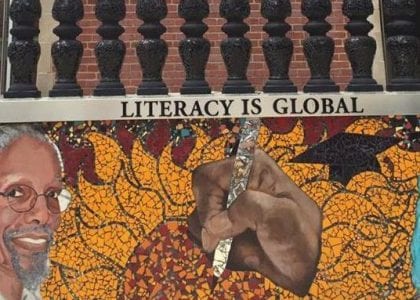 Sarah Darwiche (LAPI '16) on finding creativity within a system

Sarah Darwiche ('17) was worried that she wouldn't find creative fulfillment this summer, working with DC Public Schools to create and implement a new K-12 arts curriculum. However, through getting to know her coworkers and learning more about their artistic backgrounds, Sarah realized that she didn't have to give up her own creative ideals in order to push for policy change. Read more about her journey in her own words here.