As 2019 draws to an end, the Hart Leadership Program has concluded its Fall Connect2Politics speaker series.

Connect2Politics promotes student engagement with critical issues and actors by hosting intimate gatherings with practitioners of all types. This semester’s events tackled a variety of topics related to political leadership and community-engaged work.

Earlier this year, Durham’s municipal government launched a new program to let residents have a say in how the city’s budget is allocated. The Participatory Budgeting program gave Durhamites over the age of 13 a vote to decide what projects the city should fund. More than 10,000 people voted or submitted a project idea, a turnout that surpassed the planners’ goal.

In September, HLP hosted a conversation with Jillian Johnson, PPS’03 and mayor pro tempore of the City of Durham, to learn more about the initiative. Johnson was elected to the City Council in 2015 and helped create the program, which is the largest per capita in the nation. More than 30 students, faculty, and staff attended the event, with many asking questions about the program and its results.

A video recording of the lecture is available below:

Women, Politics, and the Electability Myth

A record number of women ran for office in 2018 and many more are expected to do so in 2020. But women in politics often face unique challenges. In September, HLP hosted a conversation with three North Carolina politicians and candidates about what it’s really like to be a woman in politics. The lively discussion featured Durham Mayor Pro Tempore Jillian Johnson PPS’03, N.C. Rep. Marcia Morey and Congressional candidate Gina Collias.

The three women spoke to the audience of approximately 70 students and community members about how they became interested in political work and their experiences since taking office.

A video recording of the session is available here:

Writing the South: A Conversation with Southerly Editor Lyndsey Gilpin on writing authentically about communities and their environment

HLP and the DeWitt Wallace Center for Media & Democracy came together in October to host a conversation with Lyndsey Gilpin, the founder of Southerly. Independent and nonprofit, Southerly is a news site that covers the intersection of ecology, justice and culture in the American South. In addition to publishing in-depth journalism, it hosts forums in rural and underserved communities to learn what issues people want to see covered.

The event drew a crowd of nearly 75 people as Gilpin shared her thoughts on the future of environmental journalism, advocacy, and misrepresentations of the South in the media. See a full recording below:

Organizing in the Digital Age

For the final Connect2Politics event of the semester, the Hart Leadership Program held a discussion about the ways data can be used in organizing. Traditionally, personal relationships and networks have been the primary tools of community organizing. However, as technology and data play increasingly important roles in our lives, some organizers are leveraging it in their work. Locally, organizations are using insights gleaned from data to build political power and affect change in Durham and North Carolina.

A video recording of the event, which had an audience of approximately 30 people, is available below: 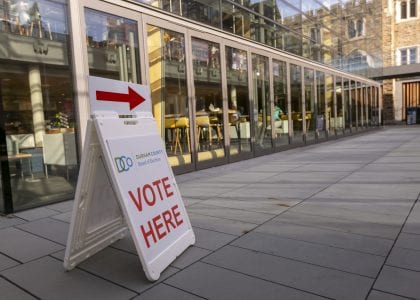 Across the nation, young people between the ages of 18 and 24 are the least likely to vote. At Duke, the Hart Leadership Program at the Sanford School of Public Policy is aiming to change that. 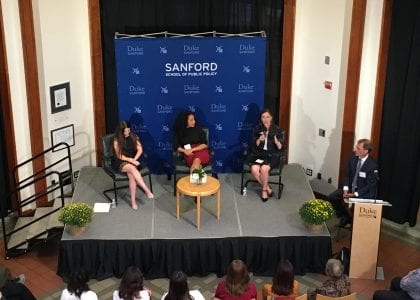 Connect2Politics promotes student engagement with critical political issues and actors by hosting intimate gatherings with political practitioners of all types and stripes.